Our ice maker doesn't dump ice into the ice holder. First world problems. So when I went to empty the ice into the ice holder in the freezer this morning I saw them. Waffles. Four waffles, sitting right on top of the bag they came in, in the freezer. Someone got waffles for breakfast and was so hungry they couldn't be bothered to put the waffles back in the bag they come in for fear of dying from starvation. I'm sure that's what happened. What other explanation could there be? 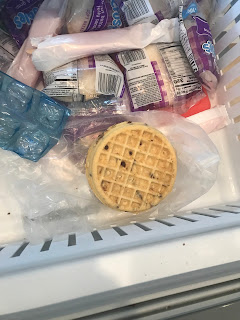 There should be a sarcasm font. It should come with automatically inserted 'eye roll' emojis and everything. Someone invent that please.

Back to the waffles. Is it a big deal? No, it's not. Is it ridiculous and lazy? Absolutely. But big deal, no. However let me set the scene for the 20 minutes prior to locating said waffles. I had just come downstairs after putting away a weeks worth of clean clothes (that I also washed today, thank you very much) with four wet pool towels, three wet swimsuits, 5 cups from the kitchen, a destroyed Monopoly game, a clump of hair from a hair brush (that was left in a sink) and a the shards of a shattered play teacup. The camel's back is now broken.

It's almost impossible to stop. One thing sets me off and immediately I'm reminded of every single thing that the kids haven't done to help and I start writing things down. I write down 'no one ever offers to help me' and 'when I ask for help you complain' (in fairness to my middle kiddo, she never complains when I ask for help).  I stopped writing there because I was stuck between my childhood self and my adult self. I've had this fight before only I was the kid. My Mom was the one writing things down and reminding us of all the things we don't do to help. And I want to stop myself but I can't. I can't calm down enough to not want to take away all the things; all the privileges.

When they got home, I didn't yell. I just stared them down, certain Dan had warned them (he was running errands with them and I texted him the picture of the waffles and the words 'lazy and disrespectful'). There were muddled apologies about the waffles and then very calmly I told them this was it. I told them all of the crap I hauled downstairs and about the shards of teacup and the hairball and I told them I was done (as I said those words I heard my mother come out of my mouth... it's impossible to stop it from happening). I mean obviously I'm not actually done because what would happen if I went on strike? Waffles in the freezer aren't enough for a strike, but can you imagine? What would the laundry look like? Lunches? School forms? Would anyone even brush their teeth? Nope. Probably not.

This is a meltdown I have a couple times a year. And every time, the kids shape up and help and do what we ask them to do (to be clear we ask almost nothing of our kids... help with the dishes, take out some trash, be kind, that's about where it ends). And then slowly the lazy creeps back in and I don't notice because it happens slowly and I'm busy wiping asses and being the keeper of all the things (if you didn't read the blog about the 'Keeper' you should) and before I know it someone is rolling their eyes at me when I ask to let the dog in (did you know that Moms are the only ones who actually hear dogs bark? #sarcasmfont).

Not this time. If you blog about it or put it on Facebook you have to stick to it. It's a rule. I'm not going to make my 20th chore chart and use star stickers or freaking magnets that equate to money or a reward. They're going to help out because they are part of this team dammit. And I'm not going to forget to ask for help even though sometimes it's just easier to do it myself.

I'm not sure when I'll give the iPads back. They'll be spending their own money at the bookfair this year. And they know where the fucking waffles go. My work here is done. For today.

Disclaimer: my husband is an amazing man who works his ass off for us 60 hours a week and is a HUGE help when he is home. I know life wouldn't totally fall apart if I were to go on strike, but the ship would definitely start taking on some water. Also our kids aren't always assholes. Just some of the time. All kids are, right?

Disclaimer about the disclaimer: After I wrote the disclaimer I thought, 'that's stupid, this is your blog. You don't have to qualify anything. And people are going to assume what they want regardless of what you disclaim or don't disclaim.' But then I left the disclaimer. And added this one.

Wait, your kids KNOW how to cook a frozen waffle? Pat yourself on the back for that one! -Abby

Well said! You are civilizing heathens. I figure you have at least twenty five more of these "come to Jesus" events. But here is the secret--it really does work.. ❤️ THE MOM

Laugh out loud funny and so so true. Moms are the dumping ground for all things. Bravo for fighting the good fight and being a great mom.

This weekend we had apple peels in the bathtub amongst other things. Whhhaaat? No ma'am!

Wonderful! You might be the keeper of many things, but not of frozen waffles. (Kudos to you for teaching your kids to make breakfast... I'm stuck in the "you can get your own f'ing granola bar if you're starving" phase. (Sigh) - Amanda Ross