When I resurrected this blog a few weeks ago I promised honesty and vulnerability and real. Here it goes. This post has been sitting idle for 6 or so weeks. There's no turning back now.

Summer was awesome. I'm sad it's over. Seriously sad. It was such a nice reprieve from the scheduled chaos of the school year. Plus, I didn't want to kill my kids at the end so that was a win, too. On a particularly adventurous morning, I took them to a splash pad we'd never been to before (not really a surprise since we've only lived here a year and I don't get out much). Pro-tip: get there before the camps arrive and leave depart when they arrive.

Before we left I asked a stranger to take our picture. Normally I would have just taken a picture of the kids and been on my merry way but I'm not in the picture a lot. I want to be in the picture. I want our kids to have pictures of us on adventures or just laying on the couch eating ice cream (but not really on the couch because... kids and type A tendencies). I want them to remember me as the Mom who was there with them! Anyway, I had a stranger take a picture of us.

I wore a two piece. I have several two pieces but most of them can be described as a 'tankini' rather than a 'bikini'. I even have a swim dress. For a few minutes a few years ago I thought it was cute and so did Kenneth Cole. I think we both regret those minutes (makes mental note to put in donate pile).  Anyway, back to the bikini. This is not my MO. But lately I've been pushing myself outside of my comfort zone; way outside. I've been pushing myself face first into my mushy midsection, stretch marks and insecurities. I'm not sure why but I'd like to think it's an effort to make myself vulnerable. To make myself vulnerable and then to become more courageous (a la Brené Brown) and confident.

Once the photo was taken and we were home eating popsicles and hotdogs (in that order) I had to decide what to do with it. To post or not to post. Non-vulnerable me would have let it live forever in my phone. Recently vulnerable me could take a step out of my comfort zone and share it. It's really a giant leap outside of my comfort zone.

When I looked at the picture something happened. I didn’t see my biggest insecurities (which are definitely in this picture), I saw Cannon. I saw my almost 9 year old son hugging me with all of his might. Wrapping his arms around me, loving me. He was loving the morning together at the splash pad. Loving me being there, being present. Know what he doesn’t care about?  My stretch marks. Or my weird stomach skin that's been pushed way beyond its capacity three different times. He doesn't care about any of my insecurities, really.  And when I looked at the photo I realized, neither should I. Knowing that I shouldn’t care and actually not caring are two different things. It took me three kids and a solid 36 to get here (and there are a lot of days where I’m still not there). So I'm sharing it here, to remind myself when I need a reminder. And for anyone else who may need a reminder of how much more important it is to just be there, and be you and be vulnerable. Setting an example of my authentic, flawed self is one of the best things I can do for our kids. Chances are they won't be a supermodel grazing the cover of Vogue, and those professional sports dreams will probably not come true. They won't be perfect. None of us are. But they can be real. And honest. And courageous and kind. And learning to be those things, starts at home (or at a splash pad as the case may be). 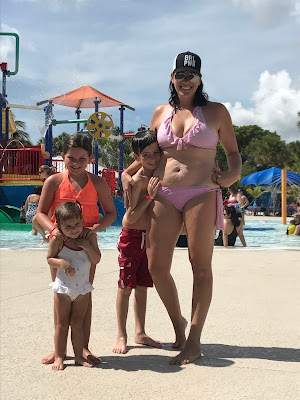 Great post!! Thank you for your vulnerability and for reminding us (your readers) that being a mom involves being a role model on a lot of levels including how we love ourselves. Great photo by the way!! ;)

Love this! And btw you look amazing!