Been a while since I did one of these but this time, I can't resist.  The challenge is sparkle.  What sparkles more than a sunset on the gulf?  Not much.  I adore this photo.  If both of my kids were in it I might explode. 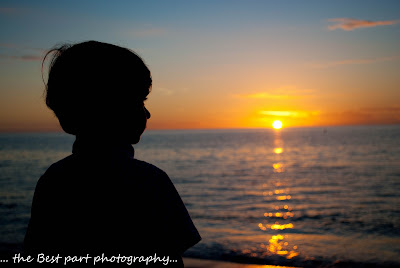 Do you remember last year's new years eve post?  I didn't either.  So I went back and read it.

You should too, before you continue.

I have been a blog slacker (btw, just renewed my domain therefore I resolve to be a better blogger than I have been the final quarter of 2011) and wasn't even sure I was going to write a new year's post this year.  But, alas.  Here we are.

So.  2011.  Wow.  We had no idea what you had in store for us and boy did you ever have plans.  First, let's review the things I said I wanted to do (because I don't make resolutions, I think they're BS and can't keep one).

I said I wanted to do another half marathon.  Fail.  I did not do another half.  However, I have taken a liking to jogging and plan to continue.  I have no current desires to run 13.1 miles.

A long weekend with the husband was on the list.  Well.  We had plans to go to the Greenbrier and take a long wonderful weekend.  But life got in the way and when we were supposed to go on the trip we were putting our house on the market.  We did spend a night downtown without our kiddos.  That kind of counts.

I requested eight solid of sleep.  I think I get that on the regular now so that's checked off the list.

Write more.  I did write more.  A lot more this summer and fall.  I had a lot to write about.  We moved.  To Florida.  We lived in an apartment.  With a dog.  We bought a new house.  We started a new life.  Then I stopped writing when that new life got busy.  Again.  Will be better. Swears.

I did not figure out how to make a living blogging.  However if I ever get a tax id (which is on my to do list... cause you need one when you have a small (teeny tiny business) I may get 10 bucks from adsense.

I wanted to ring in my 30th in style.  Thanks to my amazing better half.  That happened.  In a major way.

And we laughed.  We celebrated.  We loved hard.

We are wrapping up the year with a week with our toes in the sand.  So lucky.  So grateful.  Not taking one second of it for granted.

So over crab cakes and champagne we will ring in a new year just the two of us (cause the other two will be in bed by then.)  With new things in store.  New adventures.  New excitement.  New.  And from 2011 we will bring with us the knowledge that things happen for a reason.  A peace of mind that what will be.  Will be.  And joy.  We will bring the joy and laughter and never ending fun that Cannon and Emerson bring us every day.

And so to plagiarize myself from last year.  Hope your plans are stellar. Hope the champagne is cold. Hope 2012 is magical.

I've had some requests for some laughs.  Ok. Fine, one request.  From a best friend.  Whatever.
The Santa/ Elf on the Shelf threat has lost all power.  The breakdowns are epic and it's like the kids understand that stress comes with the holidays.

Against my better judgement I went to both the grocery store and the mall Monday with both of my children.  Here's the thing.  Monday afternoon at the mall the Monday before Christmas is not quiet like I thought it would be.  At all.  And it never fails.  We finally get to the store we need to go to and he says "Mommy!  I need to poop!"  Every. Single. Effing. Time.
Took the 3 year old to the dentist a few weeks ago.  He was a rockstar.  Just laid there and watched Bubble Guppies.  He had a cavity.  I lost my mom of the year award.  Shockingly.  It's not from the crap he eats.  Cause it was on a front tooth.  So now he flosses.  More than I do.  And no more milk before bed.  Lesson learned.

How do you discpline a one year old? She pinches.  When you are holding her she pinches your arm.  When she is standing at your feet, she grabs your knee skin (don't lie, you have it too) or tries for some other skin.  And when you say no, yell no, move away, tell her it's bad, she smiles.  Laughs even.

I think I am finished Christmas shopping.  Think.  But this is the time where I get all 'I don't care, just buy it'.  So staying away from the aforementioned mall is important.

I ordered too many Christmas cards.  Way too many.  Want one?
I don't know what to wear when it's December and it's 80.  I feel weird putting on shorts and flip flops.  I mean not weird enough to not do it.  Just to be clear.
Speaking of what to wear. Man am I in a damn rut.  I feel like I wear the same five things all the time.  Hoping Santa sends some giftcards and some time to shop.  All by myself.

In our old house it was hard for babies to open doors.  They were knobs.  Here they are handles.  And she can open them. And she does.  In particular the one to the bathroom.  Oh and the lid is always up.  Cause I have a boy.  So that's fun.

Christmas cookies with their great grandmother and cousin this afternoon.  So that's pretty rad.

Also, I plan on bringing 'rad' back.  Also bringing 'sexy' back.

Hope you are merry.  Hope things are bright.  Hope you didn't miss me too much.  To all a good night.
Posted by Corey at Wednesday, December 21, 2011 1 comment:

I wrote earlier in the week about the magic of Santa.  The magic of the season.  The magic that lives in the eyes and hearts of children this time of year.  Then a friend sent me this article.  Read it.  It's perfect.  Could not have said it better myself.

Also.  Launched my new photography website this week.  I'm in love with it.  Maybe you will be too.  Check it.

The halls are decked. There are parades and parties to attend.  There's a week at the beach coming.  It's good.  Hope it's good on your end too.

Happy weekend!
Posted by Corey at Friday, December 09, 2011 No comments:

We got a tree this weekend.  It's late for us.  Travel and busyness delayed the selection of the perfect frazer fir.

Fireworks stands and Christmas tree lots are everywhere in Florida.  At their respective times of year of course.  So there's the huge lot at our local high school which benefits the boosters. So, while fighting off the plague a stomach bug we ventured out.

Cannon was in love with walking among the trees, smelling the smell, helping Daddy pick the perfect one.  Until.  He spotted him.  You know.  The man of the season.  He's on every corner, in every store, watching your every move.

Cue the bee line to Santa, who's back was to us because he was helping himself to some warm coffee (cause it was a frigid 78 degrees at 1pm).  Cannon stopped about three feet behind Santa and said, 'Mommy, I just want to watch'.  So he did.  Then Santa turned around and this is what came out of his mouth, 'Hi Santa, My name is Cannon and I would like a scooter for Christmas please'.  Of course it was slightly mumbled because everyone gets nervous when talking to the man with the list.  But it was magic.

Santa had on Air Jordans.  Was slightly thinner than a 'jolly old elf' and his costume left a lot to be desired.  It didn't matter.  In the eyes of a three year old, he was in the presence of greatness.

I know the real reason for the season and thanks to Christmas carols and a nondenomenational preschool, Cannon does too, ish.  I mean he knows it's someones birthday.  That's good for now.

But there's another part of the season.  A part that lives in the eyes and hearts of children.  A part that is pure magic.  About this generous man who blesses you with gifts once a year.  If you believe.  And when you've seen a three year old who's gotten an email video from Santa (portablenorthpole.tv do it, trust me) or who runs into Santa and simply must go talk to him, you know it's there.  There's magic in the air.  And sure, we may get to play Santa to keep the magic alive but for me, that's the best part.  That's the fun.  Seeing your children's eyes light up and knowing that someday, they'll know.  But for now, they believe.  It's magic.  Pure magic.

The Best part.  If you will.