I am not a germaphobe. Far from it. I have put the baby down on the floor of an airport bathroom so I could put the toddler on the toilet. I probably don't push hand washing as much as I should. Germaphobe or not please tell me why you would buy an automatic hand soap dispenser a la Lysol. Marketed as a way to avoid touching the 'dirty hand soap pump'. You are getting soap to wash your hands. Just saying.

I think I have decided to take some photography classes once we are settled in FL. Really just decided. See, I need something. Just not quite sure what yet. So maybe, this is it. And if I could eventually make money doing it, that would be swell. I am not a salesperson so you won't find me pimping tupperware. And I love taking pictures. Mostly of my kids. I will get past that though. And I think my pictures are pretty good. But pretty sure others don't. At least not enough to pay me to take them. But maybe if I can capture moments of joy like this one with my own crew, I can do it with others. Or maybe I'll be selling Tupperware. 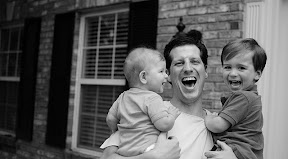 The longer I am away from TV the more I realize how it affected who I was. More on that later.

I have acquiesced to the baby. Dream feed is back. She's sleeping until about 5 now. The reasons are several but we are traveling a lot in the next couple weeks and then moving into an apartment. Where crying in the middle of the night isn't an option. But while teeth (yep, there's another one) are coming in and life transitions being made, the least I can do for her is try to stay on what she knows as a schedule. I know. Against everything most moms stand for and what I believed until I was here. In this position. Judge away. Judging myself.

Everyone keeps asking me if I have packed. I have not. The movers are packing. Should I be packing? Maybe just thinking about it. I am purging still. I have nightmares about opening boxes and saying 'what in the hell did I keep this crap for?'.

I am over autocorrect changing 'hell' to 'he'll'. When I mean HELL I mean HELL. Not HE WILL. I will add the apostrophe if I need it. Thanks.

Took Cannon to the grocery store today. The one with the little carts which he loves. Came home with CARS macaroni and cheese, CAR fruit snacks, and CARS cereal. Thank you Pixar and Disney.

I don't like beer. I can only drink beer at a hot baseball game. And it has to be what beer drinkers consider water. Ultra light super light. But tonight. I tried Shock Top Raspberry Wheat. Thank you. I think I'll have another.

The Best part? Thinking about a new chapter. Even planning for it.