This will probably bore most of you but there has been a terrific development in medicine that directly affects Cannon and Baby Girl and any other children we may have.

I have scoliosis (click link to read what I wrote about it when I was 14).  Adolescent, idiopathic, genetic, scoliosis.  My Dad has it, my Grandma has it and chances are good that Cannon will have it.  My brother doesn't have it because in our family it's passed mother-son and father-daughter (and because he couldn't handle it :)).

Normally, scoliosis isn't a big deal for kids.  Usually it's minor curvature that has no affect in life.  In our case it's anything but.  When I was 14 I had an anterior/posterior spinal fusion to correct it.  I have three rods and five screws in my back and I'm missing a rib and six disks (this is the reason I didn't have an epidural when Cannon was born).

This is actually my back. 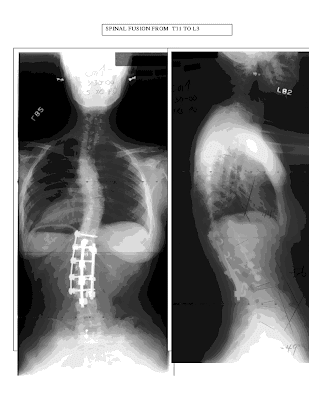 Prior to my surgery I wore a brace for two years.  It's ancient history now but when I had to wear it, it sucked.  And it didn't help.
Well, for the last few years we've been participating in a study to identify some genetic markers for scoliosis and this week the New York Times published an article with terrific news.  Basically they've identified a genetic marker that will allow doctors to do a simple saliva test to determine if scoliosis will get bad.  So, instead of Cannon having to wear a brace for two years and then having surgery (which by the way isn't even a fusion anymore) they will be able to swab his cheek and tell how bad his scoliosis will get.  From there we'll be able to determine a treatment plan.
I don't want you to think I am assuming he'll have it but chances are pretty good that he will since I have it so severely.  However, my aunt's three boys don't have it and she likely has the genetic markers for it.  So, who knows.
I'm far from afraid of him having it.  Scoliosis is part of who I am, my scars build character and if scoliosis is the worst thing we have to deal with, we'll consider ourselves lucky.  Very lucky.
Great news.
The Best part?  Progress.
Posted by Corey at Thursday, August 12, 2010

I know we've talked about your surgery... but seeing the x-rays really gives a good picture of the amount of work you've had done.

So, so glad there are easier ways to treat it now! You are a trooper, but so right...if this is as bad as it gets, life is good!