Something in the Water... 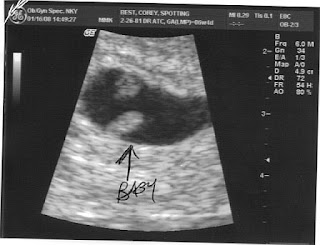 Maybe it's the social networking connections, or re-connections I've made thanks to Facebook and blogging (let's be serious... no one actually reads the blog other than my husband and a couple close friends... but it's early still) or maybe it's in the water.
It seems like every time I turn around I have an email, phone call or an instant message with a friend telling me they're going to have a baby! I think a dozen people in the last few weeks have broken the exciting news. It's all caused me to be reminiscent of when we were there, 12 weeks pregnant with Cannon (who had no name until the minutes after his birth) and figuring out creative ways to tell people we were expecting. 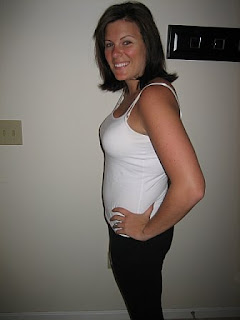 With my parents, we went home to see my Mom before she started chemotherapy. We took her a basket of goodies and each sported a new "Save the Ta Ta's" t-shirt. In the basket was an ultrasound picture and a "Save the Ta Ta's" onesie (which Cannon never wore, who knows where it is). I was so worried about telling my parents we were pregnant and in hindsight, I don't know why. I think it's that they were 32 before they had me and I wasn't interested in the 'you're too young' lecture. I remember that night, we went to dinner at the club and my Dad told everyone he saw he was going to be a grandfather. I cried every time. Now he calls himself Cannon's Doobie (our name for Grandpa because that's what I call my Dad). 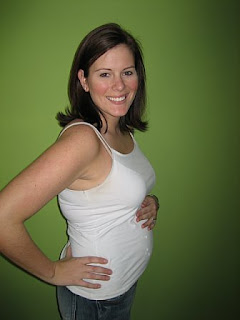 We told Dan's parents by giving them a framed ultrasound picture. They were excited, granted the level wasn't quite as high as my parents because my in-laws had heard this same news twice already. Nonetheless they were excited for us! 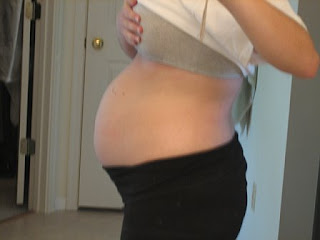 Before we had Cannon, our excitement for people who told us they were expecting was different from the excitement now when someone shares the news of a baby on the way. I think it's because now we know the amazing adventure they are about to embark on; the likes of which you can only imagine when you are pregnant for the first time. For 9 months--it's really 10--this complete stranger lives inside of you. You nurture it and prepare for it but you don't actually know it. You are basically caring for a stranger, a stranger you love, but a stranger. Then, blame some of it on hormones, once that baby is born you expereince love like you never imagined possible.
After Cannon was born I fell in love with him, a love like I had never imagined, but more than that, I fell in love with Dan all over again. I didn't think I could love Dan anymore than I already did, but Cannon's birth took that love to a whole new level. Watching your husband, best friend, partner, and father of your child become a Dad is magical.
My mom used to say, "I love you, but I love your Dad more. Your Dad comes first.". I thought I understood. I didn't. I do now. I could not do this without Dan (and would like to think he couldn't do it without me...). He comes first. It is that friendship, that love, that marriage that I hold onto hardest because without it, Cannon wouldn't be here. 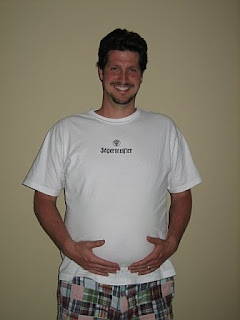 I can't wait for new babies to be born and for new life to be celebrated and old love to grow stronger.

The Best part? Knowing the joy that's on the way for so many people I care about... no matter if it's a matter of months... or years.
Posted by Corey at Saturday, August 01, 2009