For the second time in 4 years, I used the food processor. The first time was in 2005 when we were living in Madisonville, got a wild hair, and decided to make salsa. I forgot how cool this thing is! This time, I decided to make pesto. This was not an impulse decision. Another blogger posted a recipe I thought sounded yum and so I decided to give it a shot (recipe to follow). Here's the thing about pesto, if you like it you can eat it on almost anything! Chicken... tuna steaks... pasta...

So, this was the second time with the food processor (took me 20 minutes to figure out that I had the lid on backwards... doesn't work if the lid's on backwards) and the first time with (gasp) canned chicken. I don't know why I'd never used it before... probably because my mom never used it so it was unfamiliar territory. I think I was nervous because I don't do tuna fish in the can. I can't stand the smell and have never gotten past it. I was a bit scheeved out by the selections at Walmart so elected for Sam's brand and was pleasantly surprised. It's definitely much easier than baking or grilling a bunch of chicken and then shredding it. And, it tastes pretty good too! I will for sure start using it to make chicken salad and stuff like that.
So, first the pesto recipe.
2 cups of fresh basil leaves (packed)
1/3 cup of pine nuts or walnuts (optional)
1 tablespoon of minced garlic (or 3 cloves)
1/2 (or a little less) cup of olive oil
1/2 cup grated parmesan cheese
salt and pepper to taste.
Put the basil leaves and pine nuts in the processor and pulse a few times. Add the garlic, pulse again. While pulsing, pour olive oil into the processor (stop to scrape sides of the bowl). Add cheese, pulse again until it's all well blended. Add salt and pepper to taste.
Pesto Chicken Pockets
10 ounces of shredded chicken
1/2 cup of sour cream (I used reduced fat, tasted fine)
Pesto
Crescent Rolls (I used reduced fat, tasted fine)
Mix chicken, sour cream, and pesto (depending on how strong you want it). Take the crescent roll triangle and make them into a square by putting two triangles together and mash the seam together. Place a scoop of the pesto chicken mixture in the middle and bring opposite corners of the crescent rolls together at the top. Bake according to directions on the crescent rolls. They were delish! 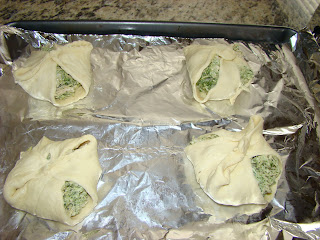 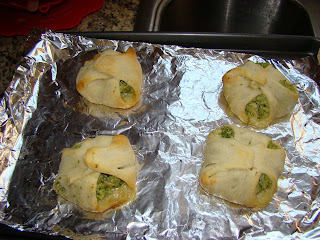 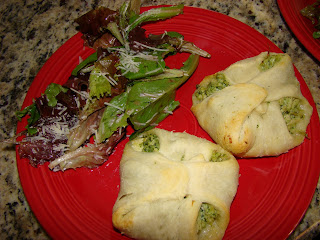 I have some left over pesto and I froze some (squeezed it into an ice cube tray and will take cubes out and put in a zip lock once they're frozen). 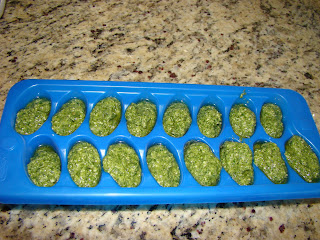 The Best part? Dan liked it a lot and I think even Cannon would have eaten it!
Posted by Corey at Friday, August 07, 2009