For months, I've read blogs, stalked blogs, passed time at work reading others' blogs. I've decided, at the urging of Vogts, to create my own. I've toyed with the idea for a while but always come back to the same conclusion: who the hell wants to read about what we're up to? Well, I guess we'll find out. I love to write, I love to talk, I love to write and talk about our family so it could be a good fit. We'll find out.

Today was spent in the news world (Wednesday is thankfully my Friday). We've been covering a case for a while of a 28 year old man convicted of murdering his wife. I've covered hundreds of murders and this is not your 'typical murderer' (if there is one). It's a middle class, suburban guy who looks like he could be a PLU (People Like Us). The evidence was scarce and the guilty verdict surprised a lot of people. The community support for his family since he went to prison has been overwhelming. Today, he got a new trial. He's no longer guilty of murder, he's charged with murder and is innocent until proven guilty. His guilty verdict was thrown out and the prosecution has to start again. Whether or not he did it isn't for me to decide. What I'm always taken by is his mom. I can not imagine watching my son go to prison for something I truly believe he did not do. It would be a heart wrenching journey and would take great strength and character. The journey has clearly taken it's toll on her but the motivation to seek justice for her son is the driving force. On the flip side, my heart breaks even more for the family of his late wife who may or may not have been murdered at the age of 28. Their pain is unimaginable.
I hope myself nor anyone I know ever has to experience anything close to what they are experiencing.

The Best part? I have the next four days with Cannon and Dan. Can't ask for more. 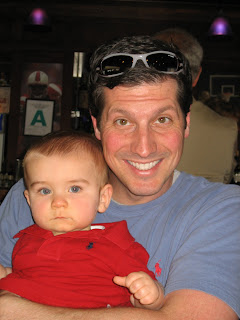 It's always hard when you see the personal, or family, side to those stories. I too could not imagine being the parent of either of those people. If he is convicted again, his life is over too. Just sad.

thank god you are only in that newsroom 3 days a week now!