I am brunette. Always been brunette. Most brunettes have brown eyes. I have brown eyes. Dan is brunette (or the male version of the word brunette... sounds so feminine). Dan has brown-ish eyes. Neither of us is even close to blond (except for a bad experience with "Sun In" in the 90's). 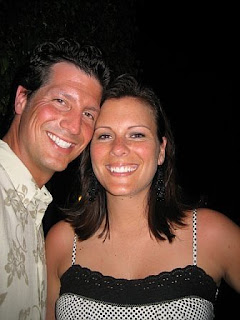 And then there's Cannon. His hair will definitely be dark (if he ever gets hair), but the eyes, I'm not so sure. For the first eight, even nine months, everyone said, 'they'll change'. But now, as we quickly approach his first birthday, I'm pretty sure the blues are here to stay. 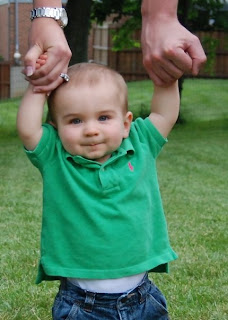 What's cool and wonderful about Cannon's blue eyes is that they come from two generations away. Neither my Mom or Dad, nor Dan's parents have blue eyes. But both of my Grandmothers have or had blue eyes and Dan's late paternal Grandmother had blue eyes. To me, this is not only amazing but a wonderful trait for him to carry on.

What a joy it is for my Grandmother to know that her Great Grandson has her eyes. And I know that my late Grandmother is smiling down at him, through her baby blues. I can only hope that I will be able to pass on to Cannon the wisdom, and guidance my Grandmothers passed onto my parents and then to me.

And maybe, just maybe he'll pass that wisdom, generations old, along to his children. And maybe even those blue eyes too.

The Best part? Blue or not, we are getting to see the world through a whole new set of eyes. 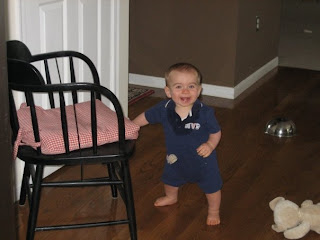 I LOVE the sentimental value of this post... almost made me cry!